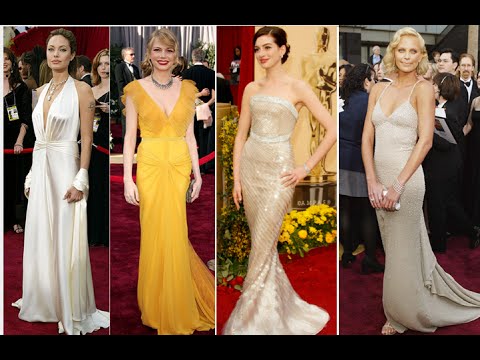 The 19 Best Oscar Dresses of All Time

01. JULIA ROBERTS
Julia Roberts brought back Old Hollywood glamour in this black-and-white Vintage Valentino dress in 2001.
02. MICHELLE WILLIAMS
Michelle Williams was flawless in a canary yellow Vera Wang gown in 2006.
03. HALLE BERRY
Halle Berry showed off her famous physique in this sexy sheer Elie Saab creation in 2002.
04. MARION COTILLARD
Only Marion Cotillard could pull off this unconventional fish scale Jean Paul Gaultier gown she wore in 2008.
05. NICOLE KIDMAN
The Grace of Monaco actress more than pulled off her bright-colored John Galliano for Christian Dior dress in 1997, accompanied by her then-husband, Tom Cruise.
06. RENEE ZELLWEGER
Yellow is clearly Renee Zellweger’s color! Here she is in a vintage Jean Desses design in 2001.
07. LUPITA NYONG’O
The 12 Years a Slave star hit it out of the park with her Cinderella-like Prada gown in 2014, also winning the Best Supporting Actress Oscar that year for her work in the Steve McQueen-directed film.
08. CHARLIZE THERON
Talk about an incredible body. The Monster actress’ beaded Gucci gown highlighted her incredible physique in 2004, when she also took home the Best Actress Oscar.
09. ANGELINA JOLIE
Angelina Jolie was hotter than ever in this plunging white silk Marc Bouwer gown in 2004.
10. JENNIFER LAWRENCE
The Joy actress burst onto the scene at the 2011 Oscars when she was nominated for Best Actress for her work in Winter’s Bone, rocking a super sexy red Calvin Klein dress.
11. ZOE SALANDA
The Avatar actress took a chance in 2010 on this bold design straight off the Givenchy Couture runway and her risk totally paid off.
12. GWYNETH PALTROW
Gwyneth Paltrow’s girly pink Ralph Lauren gown in 1999 is one of the memorable gowns in Oscar fashion history.
13. ANNE HATHAWAY
It will be hard for Anne Hathaway to top this glittery, perfectly-fitted Armani Prive dress she sported in 2009.
14. KATE HUDSON
Kate Hudson’s Atelier Versace gown in 2014 is Old Hollywood glamour with a modern twist and all sexy!
15. CAMERON DIAZ
Cameron Diaz has never looked better than in this dazzling nude Oscar de la Renta dress in 2010.
16. PENELOPE CRUZ
Penelope Cruz oozed confidence in her extravagant Atelier Versace dress in 2007.
17. MILA KUNIS
Mila Kunis established herself as a red carpet force to reckon with in this pretty lavender Elie Saab gown in 2011.
18. SANDRA BULLOCK
Sandra Bullock shimmered in an unforgettable gold Marchesa gown in 2010.
19. BEYONCE
The superstar proved sometimes less is more in this simple — but gorgeous — black velvet Atelier Versace gown.