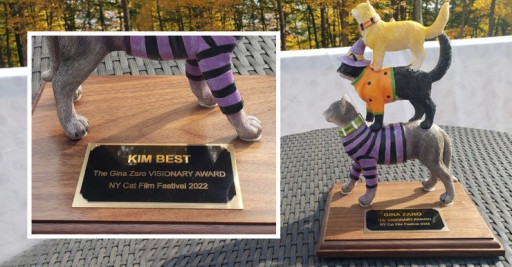 With the premiere of the fifth annual NY Cat Film Festival sponsored by cat product brand Dr. Elsey's, the event has announced filmmaker Kim Best as the winner of the Gina Zaro Visionary Award.

Inspired by Gina Zaro, Dr. Elsey's loyal employee of many years, Tracie Hotchner explains that this award has been created to keep inspiring filmmakers and their love for cats. "I created the Gina Zaro Visionary Award for Kim Best," Hotchner stated. "[It was] named in honor of the woman who inspired the festival itself and bestowed on Kim because her work embodies everything this festival is about: finding joy and humor in our relationship with cats and celebrating all the ways kitty cats touch our lives."

With her films making it into the top selections for the festival for the past five years, Hotchner decided that this was the perfect way to recognize both an incredible filmmaker, Kim Best, and a colleague who worked above and beyond to get the festival off of the ground, Gina Zaro.

As the founding sponsor, Dr. Elsey's has made it a mission to donate a portion of the festival's ticket sales to a non-profit pet organization in the area. As stated on the festival's website, the festival is meant to "shine the spotlight on these magnificent creatures and the humans devoted to them."

Dr. Elsey's is a veterinarian-owned cat product brand dedicated to creating products that solve the complex needs of pet owners. Founded in 1987 with the first all-natural clumping cat litter, Dr. Elsey's line of products has since grown to include a variety of premium litters that address the health and behavioral needs of cats in every stage of life. With the mission to enhance the lives of pets to the degree in which they enrich ours, Dr. Elsey's strives to put heart, soul and science into their line of specialty cat litters and food.