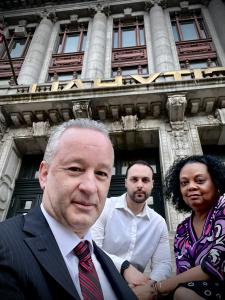 NEWARK, NJ, USA, June 2, 2022 /EINPresswire.com/ — Emmy Award winning executive producer Tracey Washington Bagley is set to make her directorial debut with “Niko Newark.” The film is currently in pre-production and is set to start filming Summer 2022. The focus of the film is the racial tensions leading to the riots that gripped the City of Newark in 1967.

The film shines a light on the everyday plight of young people in the urban community — how they were affected by the tragedies (racism, death, corruption) that take place that change their lives and the city’s history forever. This is a topic stirred by controversy and intrigue while bringing up a valid and necessary conversation about race relations that we still feel overwhelmingly to this day.

Inspired by a True Story

This tragic coming of age film will be brought to you by Nick Dessipris of New Ark Productions in partnership with producer Rhyan St. Clair of Little King Studios. Inspired by true events, this drama takes place at City Diner in downtown Newark, New Jersey. There, eleven-year-old Niko would watch diners of different races enjoying their meals but not each other due to their deeply held bigotry. As this hideous outlook on society grows in the minds of those tainted by the toxicity, an unlikely friendship forms between the naive but fearless Niko, the son of a Greek immigrant, and Arty, an eleven-year-old quiet but curious African American kid from the nearby projects. This bond, formed organically from their innocence and lack of prejudice, will be tested as the City of Newark erupts in race riots during the long hot summer of 1967. Will this powerful unity survive and serve as a beacon of hope for the future of the city, or will it crumble in the flames of a city many deemed to be lost?

This is a cautionary but ultimately inspiring narrative that beckons the viewer to value the quality of a person over the color of their skin.

The production is currently casting.