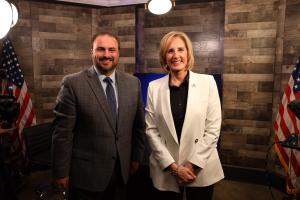 We strongly support the efforts of these lawmakers. Per U.S. law, Islamic Republic regime officials should not be allowed to utilize U.S. software and technology.”

The letter notes that regime officials and affiliated entities are subject to secondary sanctions that prohibit U.S. nationals and companies from providing services or material support to U.S. designated terrorists or entities.

“It is unacceptable that U.S. designated foreign entities freely use Twitter, despite U.S. laws and regulations that prohibit the provision of goods and services to them. We therefore ask that as you begin to review Twitter’s business practices and policies, you will work to ensure full compliance with U.S. laws prohibiting the provision of services to U.S.-designated entities.

The Iranian Regime uses Twitter to upend free societies and threaten violence, which is exactly why the regime has been designated a State Sponsor of Terrorism and why many of it’s officials are on the SDN list today. These designations are not arbitrary or political. They are based on well-documented information and evidence, and approved only once subjected to a thorough interagency review by multiple federal agencies. Allowing designated individuals and entities to continue using Twitter to incite violence against American officials and citizens, call for the eradication of the Jewish State (Israel) and it’s people, and promote it’s terrorist proxies, in in flagrant violation not only of Twitter’s longstanding policies, but most importantly of U.S. law.”

IAL’s Executive Director Bryan E. Leib stated: “We strongly support this letter and join these Members of Congress in calling on Twitter’s incoming CEO Mr. Elon Musk to remove Ali Khamenei and all other U.S. sanctioned Iranian Regime officials from Twitter’s platform. Not only does Khamenei utilize the Twitter platform to spread misinformation while he forbids the Iranian people from being on the platform but he and many other regime officials are not legally allowed to be on the platform according to U.S. law. Thank you Rep. Tenney, Rep. Stefanik and others for taking this bold action.”