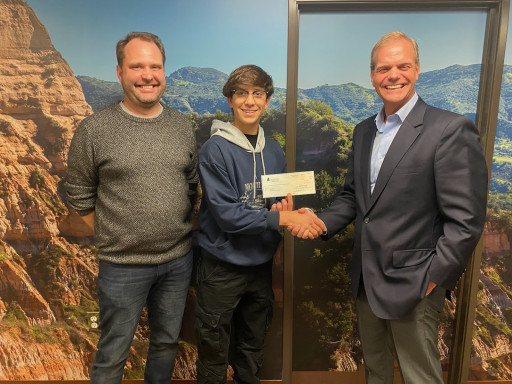 Ryan Honary, founder of SensoRy AI, is presented with a check.

At a time when many teens are planning for the near future, 15-year-old Ryan Honary is looking further ahead. He is passionate about saving the planet, and thanks to a new partnership between his company, Sensory AI, the nonprofit Irvine Ranch Conservancy (IRC) and, most recently, the Orange County Fire Authority (OCFA), he's closer to creating a better future for humankind.

"I am grateful and excited for the opportunity to work alongside Dr. Nathan Gregory and Chief Brian Fennessy," said Honary. "This new partnership with IRC and OCFA advances the SensoRy AI solution with the goal of protecting lives and the environment throughout California and around the globe."

The Newport Beach teen invented an AI-driven early wildfire detection system. Utilizing a wireless mesh network of sensors and AI capable of predicting spread patterns, Honary's low-cost network can be deployed anywhere and communicate in real-time via an app. A research grant from the U.S. Navy enabled SensoRy AI to build a team and further develop and test the technology in rugged environments. Honary was recently invited by OCFA Chief Brian Fennessy to present the SensoRy AI solution at UC San Diego's WiFire Lab and received favorable feedback.

"Ryan's solution will enable us to monitor key factors that contribute to preservation and stewardship of our local wildlands. We believe this technology has applications that can potentially change conservation and land management everywhere," said Dr. Gregory.

IRC sees such broad potential in this technology that it recently invested $250,000 of its own funds that will allow the network to be tested more broadly. In addition, Dr. Gregory will be joining the SensoRy AI Technical Advisory Board.

In November, OCFA Chief Fennessy also joined SensoRy AI as an advisor, and his team of fire-fighting professionals are assisting Ryan in further developing his platform.

"This technology has enormous potential to keep our first responders and our communities safe by helping predict, detect, and suppress wildfires," said Fennessy.

Honary was recently selected to present his story and vision at the upcoming UNESCO Learning Planet Festival on Jan. 23-28, 2023, in Paris, France. His presentation is titled "The Future of Artificial Intelligence-Driven Environmental Solutions." The Learning Planet Festival brings together hundreds of pioneering organizations and activists learning to take care of oneself, others and the planet.

Ryan Honary is an award-winning 15-year-old student at Stanford Online High School, who has been putting his STEM-fueled passion for people and the environment into real action for years. While not developing science-based solutions to local and global climate challenges, Honary loves playing competitive tennis and, in support of a local not-for-profit, teaching it to autistic youth; singing and shredding on guitar; and surfing in his hometown of Newport Beach, CA. Follow him on Instagram, Twitter or Facebook.

Honary's solution was originally developed in response to the devastation of the 2018 Camp Fire, including the deaths of 85 people and the destruction of over 18,000 structures at a cost of more than $16.5 billion. The invention earned him Grand Prize at the 2019 Ignite Innovation Student Challenge and established the Early Wildfire Detection Network, for which he was named the 2020 American Red Cross Disaster Services Hero for Orange County. He also earned a spot in the Top 30 Finalists at the 2020 Broadcom Masters.

In March 2020, Ryan Honary's early wildfire detection system won the prestigious Office of Naval Research (ONR) Naval Science grant. This grant led to the formation of Sensory AI. The company has since received multiple rounds of funding from ONR for continued research and development.

Irvine Ranch Conservancy is a nonprofit organization whose mission is to restore, protect, and enhance the ecological health of urban wildlands in a way that fosters compatible human behaviors and inspires connections and partnerships. The Conservancy manages and restores approximately 30,000 acres of rare wildlands in Orange County, California, in partnership with public landowners.

Orange County Fire Authority is a regional fire service agency that serves 23 cities and all unincorporated areas in Orange County. OCFA protects over 2 million residents from its 77 fire stations located throughout Orange County. OCFA, founded in 1995, is a premier public safety agency providing superior fire protection and medical emergency services to our communities.