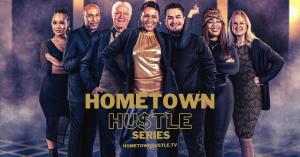 Six fearless small business owners share the big impact they have on their small town.

This season we are looking forward to showcasing how larger businesses and small businesses partner to create a dynamic economy in rural communities. ”

MARTINSVILLE, VIRGINIA, UNITED STATES, May 9, 2022 /EINPresswire.com/ — Hometown Hustle tv series creator and host Natalie K. Hodge understands the big impact small businesses in small towns make on the economy. She launched Rudy’s Girl Media in 2016 in her own hometown of Martinsville, Virginia after learning the film and television industry ropes in New York and Los Angeles. Hodge produced a test pilot season of Hometown Hustle in 2021 to tell the stories of six Martinsville-Henry County small business owners surviving the pandemic. The success of the first season, inspired Hodge to develop season 2 within a larger geographic footprint that spans across southern Virginia.

“We knew with season 1 we were developing unique and important content with a high social impact, but we were still stunned by the outpouring of support after the pilot season was released. My inbox was literally at capacity from all the small businesses and community members who wanted more.” Season 2 of the feel-good series will include ten 22-minute episodes that feature small businesses from Danville, Pittsylvania County, Patrick County, Prince Edward County, Halifax County, Henry County, Mecklenburg County, Charlotte County, Brunswick County and Martinsville. The production team and budget for season 2 has grown to accommodate exciting new elements that highlight the businesses and the communities that support them.

The launch promo for the new season of Hometown Hustle was released last week and show producers are already combing through responses for featured businesses and show sponsorship. “This season we are looking forward to showcasing how larger businesses and small businesses partner to create a dynamic economy in rural communities. The sponsorship opportunities allow for businesses, municipalities, and economic development organizations to not only contribute to the project, but also demonstrate how collaboration is the ultimate show of support.” The first sponsor to write a check was Wayne Draper of Uptown Martinsville’s TAD Space. Draper was featured in the first season and has appreciated the exposure his business received being a part of the show.

Hodge is excited about the trajectory of season 2 based on the buzz created by the test pilot season. “We really pulled the first season off with a micro-budget and a community of local creatives and supporters who willed the project into being. Now it’s time for us to level up.” The revised show format is designed to attract more distribution conversations, while the larger marketing budget will allow for featured businesses and communities to receive even greater global visibility.

Individuals who want additional details about the show, which is projected to film this summer should fill out an interest form on the show’s website: www.HometownHustle.tv.

About Rudy’s Girl Media: Rudy’s Girl Media is a Martinsville, Virginia based multimedia company dedicated to championing great storytelling in all places with all people. Recent RGM titles include Sell (2019) and Stolen Crowns (2020).