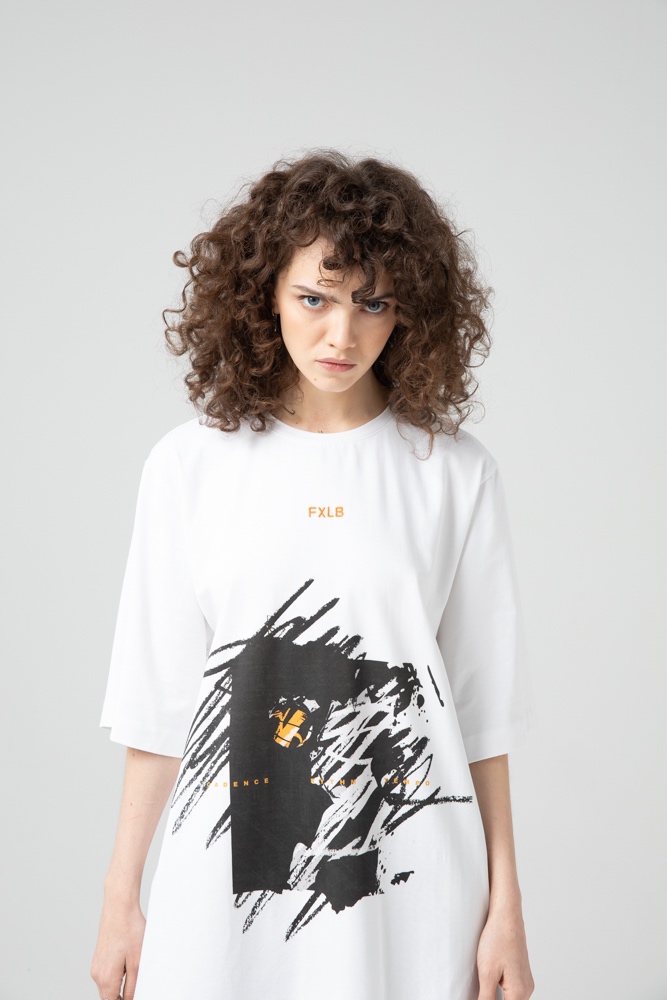 NEW YORK, NY – FOXYLAB NEW YORK introduces DISCLOSING ATHLETES’ CREATIVITY, a unisex streetwear collection inspired by the Tokyo Olympics. It is the first and one-of-a-kind capsule collection by FOXYLAB NEW YORK, created in collaboration with worlds top athletes and artists. FOXYLAB NEW YORK will donate 10% of all the profits from the sales of this Streetwear fashion collection to Voices of Children, a non-profit organization that helps Ukrainian children cope with the consequences of the war against Ukraine.

It all started in March 2021 with debates about the powerful impact of art on different industries, and it led the FOXYLAB NEW YORK founder Oxana De Castro to a realization that sport is one of the most artistic, creative, and free-spirited phenomena that meets FOXYLAB NEW YORK adventurous identity. Then, there was the selection of a list of sports that reflect the ethics of FOXYLAB NEW YORK. The list initially included many disciplines, but then was narrowed down to six: athletics, handball, modern pentathlon, 3×3 basketball, artistic gymnastics, and beach volleyball. These sports share common values with FOXYLAB NEW YORK: audacity, heart, friskiness, courage, and ingenuity.

The next major step was to find those athletes who share one more fundamental thing with the brand: creativity. FOXYLAB NEW YORK interviewed around 100 athletes from all over the planet, before the six allies were selected, those who compete with daring expression and introduce innovativeness into their sports, like true artists. Given the challenging tournament schedule, preparation for the major competition of the four (this time five) years and depletion from traveling and rigid training in difficult post-covid time, FOXYLAB NEW YORK aimed to challenge the imagination of athletes and extract the pure ideas inspired by their lifestyle and professional career in sports. Each athlete had to go back in time and recall all the little moments where the connection with art played a definite role in forming their character and later helped build their athletic performance.

As the dots between art and sport were connected, each athlete was assigned an artist-partner to embody their ideas within unique personal designs and bring them to life. To match each team of artist and athlete, a distinct personal style of each artist was carefully evaluated, and the points of intersection with the stories of each athlete were found. The goal was to establish chemistry and perfect mutual understanding between the two creators. Supervised by the FOXYLAB NEW YORK team, the six pairs of athletes and artists from different countries worked together for three months to carve out their final designs. FOXYLAB NEW YORK placed the prints on six oversized signature t-shirts and marked each piece with a special tag with the names of both creators, their signatures, and a brief description of the art fashion collaboration.

DISCLOSING ATHLETES CREATIVITY capsule merged different nationalities, cultures, and visions, stimulated by the creative environment of FOXYLAB NEW YORK. When put together, sport and art prove that they are both moved by creativity of the performers, and their combined work leads to extraordinary results.

Introduced below are the pairs of athletes and artists that worked together. Every match is explained:

1. Rebecca Silva (beach volleyball, Brazil) and Meir Srebiansky (France). Rebecca Silva hails from the seaside city Fortaleza, Brazil. She is known as a hand of stone for her strong attack and was awarded the Best Pass of the Year at the Brazilian Championship. Her first appearance at the Olympic Games was in Tokyo. Rebecca is inspired by beach volleyball, the dream of going to the Olympics, her family, and the city of Fortaleza the city in Brazil where she was born and now lives and where she developed as an athlete until she earned the trip to the Olympics. The strength of the northeastern region in Brazil is very significant in Rebeccas life. She is also a fan of strong, vibrant colors, which is why she worked in a pair with Meir Srebriansky, a French-born abstract artist based in New York, whose signature artwork includes large pieces made of colorful asymmetric resin.

2. Ulyana Batashova (modern pentathlon, E. Europe) and Felix Nguyen (Germany). Ulyana Batashova is an athlete who is broadly known not only for her multiple international titles in modern pentathlon, but also entrepreneurship. She launched Under By Me, a lifestyle brand that sells running uniforms, sweatsuits, sports diaries, and various sports accessories. In June 2021, Ulyana won a silver medal at the World Championship, and also managed to tailor uniforms for the tournament for two National Teams that also performed in Under By Me gear at the Tokyo Olympics, which is another huge success for Ulyanas brand. Ulyanas family comes from nobility and had their own coat of arms that contained a unicorn, an image, which ties to Ulyanas life closely one of the disciplines in modern pentathlon is equestrian show jumping. Ulyana has a deep love for and feels horses. The unicorn on the family coat of arms represents her dream of going to the Olympics and becoming a top professional athlete, a dream that she brought to reality with her hard work. She worked in a pair with Vietnamese-German artist Felix Nguyen, whose tender narrative style expressed Ulyanas compelling story in detail, highlighting the kind heart embedded under the strong spirit.

3. Dominique Jones (3×3 basketball, USA) and Edward Acosta (Puerto Rico). Dominique Jones is from Harlem. As a member of the USA 3×3 Men’s National Team, the 59 guard, finished 3-2 at the 2021 FIBA 3×3 Olympic Qualifying Tournament. In 2016, he took part in the FIBA 3×3 World Tour and led all scorers with 44 points in 5 games. He loves fashion, and he compares fashion with himself. His style is very recognizable, because he grew up and spent most of his life in Harlem, which imprinted its culture in him. Dominique believes that ones wardrobe must give its owner a feeling of confidence and underscore their authenticity. He worked with a FOXYLAB NEW YORK former contributor Edward Acosta because they share the same values of Harlem NY streetwear and iconic culture. A big part of Edwards inspiration comes from the Harlem influences in fashion, music, and art, and it is shared by Dominique. Acostas avant-garde bold style became beneficial in portraying Dominiques appreciation of simple but important things in life, such as family, origins, and basketball.

4. Jestena Mattson (athletics, USA) and Moko (Croatia). Jestena Mattson is a former Fresno State Bulldog, a two-time NCAA All-American, who represented team USA and placed 8th at the World University Games in Naples, Italy, became a four-time Mountain West Champion and 7th at 2020 USA Indoor Nationals in the Pentathlon. Jestena has always been into arts and fashion. She was her family artist for everything that needed to be created. In fourth grade, she designed and sewed her own dress to model at her local fair and won. She had a whole lookbook full of styles that she had drawn herself. In the future, Jestena plans to open her athletic wear brand to support young athletes. She was matched with Croatian artist Moko, because of Mokos ability to capture the most powerful details. After getting to know Jestena closer, Moko discovered a hook to authenticity that ended up being a perfect representation of Jestenas character in sports and life.

5. Eythora Thorsdottir (artistic gymnastics, Netherlands) and Marcello Silvestre (Italy) At the 2016 Summer Olympic Games in Rio, then 17-year-old Eythora Thorsdottir made history along with her team, placing 7th  a humble achievement, which has never been accomplished by any other team of gymnasts in the Netherlands before. As a kid, Eythora studied performing arts and her parents took her to her favorite musicals, including Wicked, which always put her in a happy and joyful spirit and made her feel like moving. She always appreciated arts and fashion, her preferable colors are lilac, blue, and red. At the Tokyo Olympics, Eythora performed her new floor routine set to music she made herself by recreating a piece from a song as well as performing the lyrics. Eythoras art partner, an admirer of skillful Renaissance artists who captured moving objects in a block of hard marble, Marcello Silvestre is a 3D artist, with his work he draws attention to the virtual world and space, controlled only by fantasies. They both appreciate the beauty of movement and are sure that movement is the most powerful expression of self.

6. Vladlena Bobrovnikova (handball, E. Europe) and Elena Smith (UK) Vladlena Bobrovnikova led her team to a triumphal victory at the 2016 Olympics in Rio, and she was back at the Tokyo Games to receive a silver medal. In 2020 she entered the All-Star Team, as the best Left Back at the EHF European Handball Championship. For Vladlena, going to her first Olympics felt like making a statement with her on the team, they received the first Olympic gold in over 30 years. However, her team made a big statement by winning in the toughest semifinal against Norway and crushing France in the final game. Vladlena thinks about the Olympics as a burst of emotions, colors, cultures, and a quintessential moment in the career of every athlete. For her, handball is true art that she devoted a lifetime to, and working with a British illustrator Elena Smith, whose art contains a lot of powerful expressions and hidden interpretations of global issues, helped her to frame her position and inspiration coming from a game of handball in the most confident and assertive light.

FOXYLAB NEW YORK celebrated each contributor by sharing their personal stories in exclusive interviews in their websites BLOGAZINE showcasing the deep meaning behind every collaboration to fully disclose the athletes creativity.